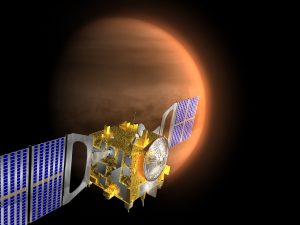 Subject line: Formation, differentiation and evolution of the internal Planets

The Venus Express mission was selected by the ESA among three different reuse proposals for buses and instruments already manufactured for the Mars Express and Rosetta missions. After a 150-day journey, it reached Venus on April 11th, 2006, and after a few manoeuvres (guided by the ESA control centre in Darmstadt, Germany) to reduce its speed, it entered its final orbit on May 7th.

The altitude of the orbit ranged between 66.000 and 250 kms from the planet’s surface, and it took 24 hours for the probe to complete an orbit. In view of the excellent results obtained and the potentiality and perfect functionality of the spacecraft, on February 23rd, 2007, the SPC unanimously approved the extension of the mission until May 2009, with an additional extension until the end of 2016. On December 16th, 2014, the mission was officially declared over.

The scientific topic from which the Venus Express mission was born was looking for an answer as to why Venus, whose size, composition and distance from the Sun are similar to Earth, had a completely different evolution which caused it to have totally different atmosphere and totally different surface conditions, dominated by a strong greenhouse effect that can cause the planet to reach temperatures of 750° K. Therefore, the exploration of Venus can provide important information on the evolution processes of the Solar System, in general, and the greenhouse effect, in particular. Furthermore, the discovery of atmospheric windows in the close infrared, around the micron, allowed to study the atmosphere at different altitudes up to the surface. This is impossible for cameras in the visible spectrum, due to the huge thickness and density of atmospheric gases (carbon dioxide for the most part) that reach pressures of the order of 200 atmospheres above ground.

On Friday 15 July, the first detailed study on this "New Year's Burst" was published in the Astrophysical Journal, using data acquired by the AGILE satellite END_OF_DOCUMENT_TOKEN_TO_BE_REPLACED