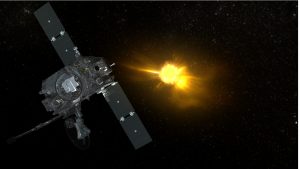 Subject line: study of the Sun and its phenomena

STEREO (Solar Reports Observatory TErrestrial) is the third mission of the NASA Solar Probe Terrestrial (STP) programme, aimed at studying the Sun. The mission – launched in 2006 from the 17B launch base at the Cape Canaveral Air Force Station in Florida – consists of two twin probes – Solar A and Solar B – which observe the Sun from two very distant probes, obtaining stereoscopic images of our star and its phenomena, such as the coronal mass ejections and the solar wind. Both probes were launched to orbit around the Sun, practically at the same distance between Earth and the Sun, and were placed respectively in front and behind our star. During their journey, they tracked and are still tracking the flow of energy and matter from the Sun to our planet.

The STEREO mission aims at investigating the origin, evolution and structure of coronal mass ejections, by taking stereoscopic pictures of the Sun. Thanks to the images released by STEREO, scientists are studying the structure of coronal mass ejections, violent eruptions of material from the Sun’s corona that can lead to power outages and severe magnetic storms when they collide with Earth’s magnetic sphere.

The big geomagnetic storms directed towards Earth can damage, and even destroy, satellites and are extremely dangerous for astronauts when they carry out extra-vehicular activities (EVA) and, therefore, are outside the shield of the Space Shuttle and the International Space Station.

Furthermore, STEREO provides images and data which are useful to study the evolution of the solar wind, which is important to understand more in depth the nature of the Sun, from the nucleus to the limits of the heliosphere, and the influence it has on the whole Solar System.

On Friday 15 July, the first detailed study on this "New Year's Burst" was published in the Astrophysical Journal, using data acquired by the AGILE satellite END_OF_DOCUMENT_TOKEN_TO_BE_REPLACED