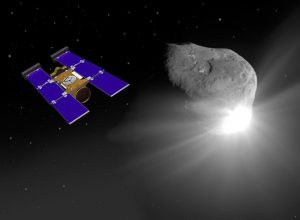 Stardust is the fourth mission of the NASA Discovery programme, and the first mission whose only focus is on exploring a comet: Wild 2. The mission departed in February 1999 from Cape Canaveral with a Delta II vector rocket and following a four-year journey – during which the probe performed a flyby of the 5535 Annefrank asteroid at a 3300 km distance – on January 2nd, 2004 STARDUST reached the Wild2 Comet.

The mission completed its first cycle of observation and collection of samples in 2006, but it was extended in 2011 with the purpose of studying the Comet Tempel 1, previously observed in the Deep Impact mission. The encounter with the celestial body happened of February 14th, 2011 and the mission ended on March 24th, 2011, when the probe ran out of fuel.

The primary goal of the mission was to collect and analyse samples of carbon dust coming from the comet Wild 2, by using a special material with extremely low density known as aerogel, similar to a big tennis racket.

STARDUST brought back to Earth samples of interstellar dust and fragments of dust coming from outside our Solar System, which are useful to study the evolution of the Sun and the other planets of the Solar System.

On Friday 15 July, the first detailed study on this "New Year's Burst" was published in the Astrophysical Journal, using data acquired by the AGILE satellite END_OF_DOCUMENT_TOKEN_TO_BE_REPLACED