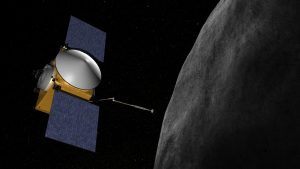 Subject line: exploration and study of the asteroids

OSIRIS-Rex (Origins Spectral Interpretation Resource Identification Security Regolith Explorer) is a space mission developed by the NASA, aimed at exploring the asteroids in the framework of the New Frontiers Programme.

Launched on September 9th, 2016, from the Launch Complex 41 in Cape Canaveral, OSIRIS-Rex is the first mission aimed at collecting a sample of rock from an asteroid and its studies will be useful to define the future missions, in order to predict and avoid an impact with an asteroid.

OSIRIS will spend a period of time between six months and one year around the asteroid Bennu. Afterwards, it will take a few samples: each of them weighs about 60 grams, and will be directly analysed when the probe will return to Earth, in 2023. Among the goals of the mission, Osiris will also map the global, chemical and mineralogical properties of a primordial carbonaceous asteroid, to characterise its geological history.

The Minister: this is how we build the European strategic autonomy END_OF_DOCUMENT_TOKEN_TO_BE_REPLACED

A new picture by the ASI hyperspectral satellite END_OF_DOCUMENT_TOKEN_TO_BE_REPLACED

A leading role for our country, with the Italian space sector guided by the Italian Space Agency END_OF_DOCUMENT_TOKEN_TO_BE_REPLACED