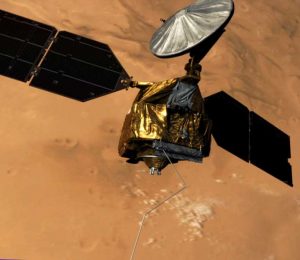 Mars Reconaissance Orbiter (MRO) is the NASA planetary exploration probe, launched in August 2005. It has been operating in the Martian orbit since the end of 2006. The MRO mission is aimed at observing through a global surface mapping (in the visible and near-infrared field), investigating the subsoil, identifying the future landing sites of probes and the future communication and navigation support to Martian mission. One of the main on-board instruments is SHARAD (SHAllow RADar), a radar used to explore the Martian subsoil. The radar is investigating the subsoil in the first hundreds of meters with a vertical resolution of about 20 meters, and a horizontal resolution of about 100 meters, while the perpendicular resolution is in the order of the kilometer based on the characteristics of the local subsoil and surface.

The radar instrument points at the nadir with a pulse setting and two modes of operation: radar and altimeter. In order to isolate the subsoil reflectors, it uses the synthetic aperture techniques. The instrument consists of an antenna and electronic system, operating in a range of wavelengths centered at MHz  +/- 5 MHz. Such configuration allows to analyse the dielectric properties of the subsoil while maintaining a low surface clutter. The selected frequencies are capable of penetrating the ionosphere. The total transmission and reception cycle of every single impulse lasts just a few milliseconds. Subsequently the received signal is down-converted, which means it is converted from analogical to digital and compressed.

The main objective of SHARAD is detecting and mapping, in selected areas, the dielectric interfaces up to a 1-km depth and interpreting the interfaces in geological and geophysical terms. Detecting interfaces in the subsoil is the first step to reconstruct the Martian geology and define the structures and configurations of layers and formations. The frequencies were selected based on the current models of Mars ‘subsoil, with the purpose of detecting the presence of aquifer deposits or layers of ice and studying the structure of polar ice deposits.

The scientific instrument was developed in Italy and provided to the NASA by the ASI as Facility Instrument, with the scientific guidance of a Principal Investigator selected by the ASI following a tender, in the person of Dr. Roberto Seu from the INFOCOM Department of the Sapienza University of Rome. The company in charge of the industrial development is Alenia Spazio, currently Thales Alenia Space, from Rome, which strengthened its know-how in the industry.

This is the first Italian facility instrument aboard a fully American mission. The ASI participated, with the direct involvement of its personnel, to the delivery and integration stages of the instrument, as well as the launch campaign, based on agreements between the agencies and a Memorandum of Understanding signed on 21/01/2004, which includes also the data management, storage and distribution by the ASI ASDC.

On Friday 15 July, the first detailed study on this "New Year's Burst" was published in the Astrophysical Journal, using data acquired by the AGILE satellite END_OF_DOCUMENT_TOKEN_TO_BE_REPLACED