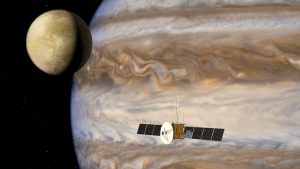 Subject line: Exploration of Jupiter and its icy moons

JUICE (Jupiter Icy Moon Explorer) is a European Space Agency mission selected by the ESA Space Programme Committee, and the first large-scale mission in the framework of the Cosmic Vision 2015-20125 planetary exploration programme, whose launch is scheduled for 2022.

Jupiter and its icy moons – Ganymede, Europe and Callisto – will be the focus of JUICE’s investigation, which furthermore will try to study the conditions for planet formation and the onset of life, and how the solar system works.

After the launch in 2002, from Kourou, JUICE will reach Jupiter in 2030 and will carry out its study mission in the Jupiter environment, which is very similar to a miniature solar system, for three years. Up there, it will have to perform a complex set of tasks: from the observation of the atmosphere and the magnetic sphere of Jupiter, to the interaction of the Galilean moons with the planet.

But it will also have to visit Callisto (the celestial body mostly covered with solar system craters), measure the thickness of Europe’s icy cap, identify suitable sites for a potential in-situ exploration and study the icy surface and internal structure of Ganymede, the only moon with its own magnetic field.

The choice of JUICE was the culmination of a process started in 2004, the year when the ESA began to widely consult with the scientific community, with the purpose of identifying the goals of the European planetary exploration in the following decade. Italy, and in particular the ASI, is widely involved in this mission, where highly-technological proposals deriving from the intense scientific activity carried out so far will find its space. The Italian Space Agency will be accompanied by the national scientific community, other research institutions and the academic world.

The Minister: this is how we build the European strategic autonomy END_OF_DOCUMENT_TOKEN_TO_BE_REPLACED

A new picture by the ASI hyperspectral satellite END_OF_DOCUMENT_TOKEN_TO_BE_REPLACED

A leading role for our country, with the Italian space sector guided by the Italian Space Agency END_OF_DOCUMENT_TOKEN_TO_BE_REPLACED