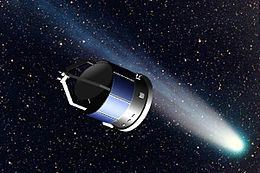 Subject line: study of the Comet Halley / minor bodies of the Solar System

GIOTTO is a European Space Agency probe, designed for the up-close exploration of the Comet Halley during its perihelium, which occurred in 1986. The mission was approved by the ESA in 1980 and was launched by the Ariane 1 rocket (flight 14v) on July 2nd, 1985, from Kourou.

In the night between March 13th and March 14th, 1986, the European shuttle passed just 596 km from the comet and was able to capture for the first time the images of a comet nucleus, by flying by its surface. The flyby put a strain on the onboard instruments. In fact, the probe was hit by the material ejected from the comet, which modified its rotation axis, made communications with Earth difficult and caused the protective shield to damage. A second impact destroyed the Halley Multicolor Camera, the imaging system which is the author of the amazing pictures of Halley’s nucleus and coma. Despite the objective difficulties that Giotto had to face, it collected a great quantity of data on the composition of the materials ejected from the comet, as well as their size and mass; such information had never been detected so accurately until then. The analysis on the probe showed that about 80% of Halley was water, 10% was carbon monoxide and 2.5% was methane and ammonia, traces of other hydrocarbons, iron and sodium. Furthermore, the pictures taken from the camera show that about 10% of Halley’s nucleus was active: three different jets were observed down the Sunward side. The mission was extended on July 10th, 1992, leading the probe to observe the comet Grigg-Skjellerup from 200 km distance. On July 23rd, 1992, the mission was officially declared over.

The main scientific goal of the mission was studying Comet Halley’s nucleus, to understand more in-depth the evolution of comets. The mission entailed flying by the sunward side of the comet’s nucleus at the shortest possible distance, to take colour pictures and make scientifically relevant measurements. The exploration of the comet consisted in characterising its nucleus and coma, determining its dynamic properties, studying its morphology and composition. In particular, the study of mineralogy and isotopic ratios of the volatile and refractory elements of the nucleus, the chemical processes happening in the atmosphere and cometary ionosphere and the plasma deriving from the interaction between the comet and the solar wind.

Italy contributed to the mission with the onboard computer provided by the then LABEN, now integrated in Thales Alenia Space Italia.

On Friday 15 July, the first detailed study on this "New Year's Burst" was published in the Astrophysical Journal, using data acquired by the AGILE satellite END_OF_DOCUMENT_TOKEN_TO_BE_REPLACED