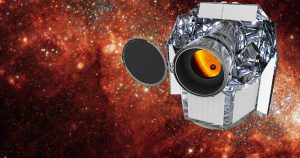 CHEOPS (CHaracterizing ExOPlanets Satellite) is a European Space Agency project targeted at studying the extrasolar planets. Most planets being studied will be those whose mass has already been measured thanks to high-precision instruments available at large ground-based telescopes (e.g. the HARPSN planet hunter at Telescopio Nazionale Galileo). CHEOPS will try to determine the size which, combined with the mass, informs us about the structure, rocky or gaseous, of the planet.

The satellite will have the task to observe with high precision the stars already known or suspected to host planets.

CHEOPS’ main scientific goal will be studying the structure of extrasolar planets whose radii typically range between 1 and 6 times the size of Earth radii and whose mass is up 20 times the mass of our Planet, orbiting around bright stars.

Thanks to the support of the Italian Space Agency, CHEOPS’ telescope measures 320 mm in diameter, is extremely compact (the main optical tube is only 300 mm long) and is optimized for highly-precise photometric measurements, was designed by the researchers from the INAF of Padua and Catania and is currently being manufactured by the plants of Finmeccanica’s Avionics and Aerospace Systems Division in Campi Bisenzio, on the outskirts of Florence. Media Lario S.R.L, a small-medium enterprise located in Bosisio Parini, in the province of Lecco, was entrusted with the finishing operations for the reflecting surface. The mirror, built in ZERODUR®, a glass ceramic material, was previously processed in order to remove the unnecessary mass and preserve its robustness, which allows it to fly in space.

The manufacturing of CHEOPS’ telescope is an acknowledgement of the Italian leadership in the field of optics, reached in these last few years by the scientific community and the industry in our country. The ASI thinks that the CHEOPS mission, in addition to the important scientific topic of studying the extrasolar planets, has a particular strategic importance due to its technological aspects, also in view of the manufacturing of 34 telescopes that Italy will provide for the PLATO mission.

On Friday 15 July, the first detailed study on this "New Year's Burst" was published in the Astrophysical Journal, using data acquired by the AGILE satellite END_OF_DOCUMENT_TOKEN_TO_BE_REPLACED