LISA (Laser Interferometer Space Antenna) is the ESA’s future mission aimed at detecting gravitational waves from space, which involves manufacturing, launching and operating a constellation of three satellites which are millions of kilometers away from each other 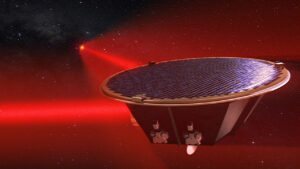 The field of gravitational waves was chosen by the ESA already in 2013, as the subject of the third Large Mission (L3) of its “Cosmic Vision 2015- 2025” scientific programme, but the definition activities of the mission started only in 2016, following the success of the predecessor LISA Pathfinder (LISA-PF) and the first detection of gravitational waves from Earth.

In fact, the concept behind LISA is the detection of gravitational waves through an interferometric measurement of the tidal deformation of the distances of a constellation of free-falling test masses, placed within satellites which are millions of kilometers away from each other. LISA-PF’s measurements proved, beyond all optimistic expectations, that it’s possible to obtain this pure inertial motion (the free fall) in space and, therefore, gave the green light to start the development of the space observatory.

LISA will be able to observe low-frequency gravitational waves, which can’t be detected with ground-based interferometers due to the gravitational disturbance of the terrestrial environment, thereby broadening the spectrum of this new cosmic dimension. These waves are emitted by huge sources, which release huge quantities of energy and will be visible, thanks to their intensity, up to the last border of the Universe: this way, gravitational astronomy will also become a cosmological instrument.

LISA’s instruments will be designed by a consortium of European institutes, guided by a German PI (the LISA Consortium). It will very closely cooperate with the ESA, which will be in charge of the satellites and the overall management of the project. The manufacturing will be entrusted to highly-specialized aerospace companies.

In view of the essential contribution given by Italy to LISA-PF, the role played by the national scientific and industrial community within the LISA Consortium is essential. The Department of Physics of the University of Trento is a member of the consortium and is offering its contribution to defining LISA’s overall architecture, to the activities of the ESA’s System Engineering Office and to developing the inertial sensor for the mission, the Gravitational Reference Sensor (GRS), based on LISA-PF’s sensor, which was developed and manufactured in Italy.

The LISA mission falls within the framework of the ESA scientific programme, to which Italy contributes about 13%.

The Minister: this is how we build the European strategic autonomy END_OF_DOCUMENT_TOKEN_TO_BE_REPLACED

A new picture by the ASI hyperspectral satellite END_OF_DOCUMENT_TOKEN_TO_BE_REPLACED

A leading role for our country, with the Italian space sector guided by the Italian Space Agency END_OF_DOCUMENT_TOKEN_TO_BE_REPLACED