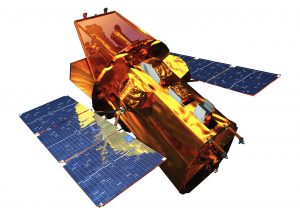 SWIFT is MIDEX-NASA class mission, targeted at high-energy astrophysics and designed in cooperation with Italy and United Kingdom. Swift is a multi-band observatory which follows the experience acquired with the BeppoSAX satellite. It was successfully launched on November 20th, 2004 and all the on-board instruments worked immediately and regularly, producing data of high scientific quality.

So far hundreds of scientific works were published in peer referee journals, among which several articles announcing important discoveries in the prestigious Nature and Science journals. The scientific excellence of the results was recognised in 2007, when the scientific team who took part in the mission was awarded with the Bruno Rossi award by the American Astronomical Society.

Swift is a space observatory capable of observing, quickly and independently, explosive sources such as Gamma-Ray Bursts (GRB) and other transient celestial events, by using its three on-board instruments: the Burst Alert Telescope (BAT), the X-Ray Telescope (XRT) and the Ultra Violet/Optical Telescope (UVOT).

From a scientific point of view, Swift aims at finding the origin of Gamma-Ray Bursts (GRB), using them to study the distant Universe and carrying out a survey of the celestial sphere in the 15-100 keV band with the BAT instrument.

Italy contributes to the Swift project by providing the following instruments: mirror of XRT telescope and its calibration, the Malindi base and ASI-NET, scientific software and archive at the ASDC. The Italian scientific teams participate very actively in the scientific activities of the mission.

On Friday 15 July, the first detailed study on this "New Year's Burst" was published in the Astrophysical Journal, using data acquired by the AGILE satellite END_OF_DOCUMENT_TOKEN_TO_BE_REPLACED