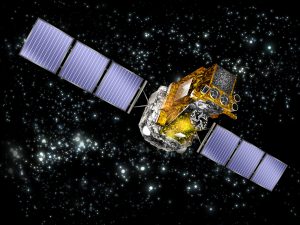 INTEGRAL (INTErnational Gamma-Ray Astrophysics Laboratory) is a European mission in partnership with Russia and United States, aimed at observing one of the most energetic radiations in the Universe from space. In a range between 15 keV and 10 MeV, INTEGRAL’s instruments study remnants of supernovae, neutron stars, black holes, active galactic nuclei and gamma-ray bursts. The four instruments point simultaneously to the same sky region, allowing a clear identification of the source.

Some of the most energetic processes happening in the sky will be finally shown in studies, such as the study on dense objects (neutron stars and black holes), nucleosynthesis in supernovae and gamma-ray bursts. The combination between the sub minute of arc space resolution of the IBIS imager and the keV spectrum resolution of the SPI (SPectrometer on Integral) germanium detector makes INTEGRAL a way more powerful diagnostic instrument than all the previous and also recent missions (SIGMA and GRO).

SPI’s main goal is observing the gamma-ray lines, such as 26AI, 44Ti and 22Na, in our galaxy, to track nucleosynthesis processes. Mapping aluminium will make it possible to track star formation in the galactic disk, while titanium and sodium, created in explosive processes, should tell us whether there are recent remnants of supernova in the disk.

IBIS, characterized by a large field of sight, helped to detect several new gamma-ray sources mainly by mapping the region in the centre of our galaxy and started to provide relevant results in the field of extragalactic astronomy.

The INAF Institute of Space Astrophysics and Cosmic Physics, under the coordination of the ASI, is the PI of the main instrument of the satellite, the IBIS telescope, which also includes a French contribution for the X-ray detection plane. It contributed also to the Integral Scientific Data Centre (ISDC).

Italy provided also a significant contribution to manufacturing the SPI spectrometer, which falls under the responsibility of France. All the working groups of the different sections (Rome, Palermo, Bologna and Milan) are currently involved in the flight operations related to optimizing the operation of on-board detectors and calibration stage, which happens every 6 months. Furthermore, these working groups participate from a scientific point of view in mission control activities carried out at the ESOC/ESA operation centre and the ISDC.

Furthermore, the SSDC has the task to host a copy of the data reduction software for scientific instruments and the archive of public data related to the mission, to guarantee their distribution and support the scientific community in data analysis. The SSDC closely works with the ISDC, INTEGRAL Scientific Data Centre, which is in charge of receiving and reducing on-ground data.

The Minister: this is how we build the European strategic autonomy END_OF_DOCUMENT_TOKEN_TO_BE_REPLACED

A new picture by the ASI hyperspectral satellite END_OF_DOCUMENT_TOKEN_TO_BE_REPLACED

A leading role for our country, with the Italian space sector guided by the Italian Space Agency END_OF_DOCUMENT_TOKEN_TO_BE_REPLACED