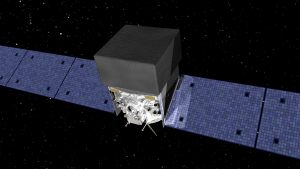 The FERMI mission (formerly GLAST) is part of the NASA programme on the study of the structure and evolution of the Universe and the DOE (USA) research programme on fundamental physics without accelerators. Furthermore, the mission is supported by physics and astrophysics programmes in several partner countries such as France, Germany, Italy, Japan and Sweden.

The FERMI observatory is made up of two instruments, the Large Area Telescope (LAT) and the Gamma-ray Burst Monitor (GBM), which will map the cosmos with an energy ranging from 10 keV to hundreds of GeV; so far, such high energy values were never reached. The LAT instrument is under the responsibility of the USA (P.I. Peter Michelson, University of Stanford), with the participation of Italy, France, Sweden and Japan.

GLAST’s scientific goals can be summarized in the following points: understanding the acceleration mechanism of particles in active galactic nuclei (AGN), pulsars and supernovae (SNR), which is key to solve the mystery of jet formation and the dynamics of shocks in supernova remnants; mapping the sky in the gamma-ray radiation component: unidentified sources and diffuse interstellar emission from the Milky Way; determining the high-energy behaviour of GRBs and other transient phenomena. Variability is the main characteristic of the gamma-ray sky; studying the nature of dark matter and researching possible decays of exotic particles in the primordial Universe and WIMPS annihilation processes in the halo of the Milky Way.

The important Italian contribution, which falls under the responsibility of the National Institute for Nuclear Physics (INFN) is related to the design and manufacture of the LAT tracker (funded also by the ASI), the management, distribution and analysis of the mission data through the ASI SSDC centre and its use by the Italian community (coordinated also by the INAF) which, traditionally, is one of the most active communities in the field of high-energy astrophysics.

The Minister: this is how we build the European strategic autonomy END_OF_DOCUMENT_TOKEN_TO_BE_REPLACED

A new picture by the ASI hyperspectral satellite END_OF_DOCUMENT_TOKEN_TO_BE_REPLACED

A leading role for our country, with the Italian space sector guided by the Italian Space Agency END_OF_DOCUMENT_TOKEN_TO_BE_REPLACED