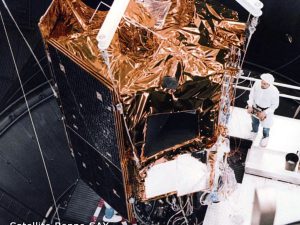 One of the greatest successes in the recent Italian scientific history, BeppoSAX (Satellite for Astronomy X, "Beppo" like the nickname of the Italian astronomer Giuseppe Occhialini, one of the pioneers in the study of cosmic rays) was born from a cooperation between the Italian Space Agency (ASI) and the Netherlands Agency for Aerospace Programs (NIVR).

Launched on April 30th, 1996, BeppoSAX made an outstanding scientific impact in the study of high energies. Already in 2002, when the mission was about to end, there were more than 1500 scientific publications based on the data provided by BeppoSAX.

The main goal of the mission was to study the cosmic emissions of X-rays, which were impossible to study from Earth due to the shielding of the atmosphere. Specifically, the mission aimed at contributing to the study of cosmic phenomena that simultaneously emit radiations across a broad range of energy levels, in order to understand the related astrophysical mechanisms.

In fact, BeppoSAX’s ace in the hole was a particularly broad spectral coverage (the range of observable emissions ‘energy levels), ranging from 0,1 to over 200 KeV. It was the first mission capable of studying X-ray sources across such a broad energy range. In this way, SAX was able to contribute to the study of a wide variety of cosmic phenomena such as compact galactic sources, active galactic nuclei, clusters of galaxies, remains of supernovae, normal galaxies, stars, gamma-ray bursts.

The major successes actually came from the observation of gamma-ray bursts (GRB), 'lightnings' of extremely energetic gamma rays coming from the Universe; before this mission, their origin had always been an enigma for astrophysicists. By showing the X-ray emission that accompanies the gamma-ray range, BeppoSAX allowed to reconstruct some key pieces of the puzzle. Throughout its life the satellite observed more than 30 gamma-ray bursts and was able to immediately launch warning signals to other space or ground-based instruments at their onset. Guided by BeppoSAX observations, astronomers from all over the world found out that these mysterious gamma-ray bursts come from extremely remote galaxies and have the same level of energy that you would obtain by annihilating into light the entire mass of our Sun, in a few instants. In other words, they are the largest explosion in the Universe after the Big Bang.

The great expertise shown in this area by the Italian scientific and technological community (further shown with the launch into orbit of the AGILE gamma-ray astronomy satellite) guaranteed a prominent role to Italy in NASA’s SWIFT and Fermi missions, this latter dedicated to the great Italian physicist due to the significant contribution given by our country in this area.

The Minister: this is how we build the European strategic autonomy END_OF_DOCUMENT_TOKEN_TO_BE_REPLACED

A new picture by the ASI hyperspectral satellite END_OF_DOCUMENT_TOKEN_TO_BE_REPLACED

A leading role for our country, with the Italian space sector guided by the Italian Space Agency END_OF_DOCUMENT_TOKEN_TO_BE_REPLACED