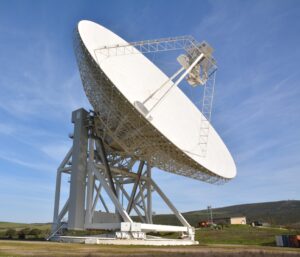 The center is able to provide support services for interplanetary and lunar missions and to allow the development of radio science activities.

The SDSA shares a part of the facilities and infrastructures with the Sardinia Radio Telescope (SRT), but has its own equipment and a specific control center to communicate with space vehicles. The SRT, manufactured by the INAF (National Institute for Astrophysics) in cooperation with the Italian Space Agency, the Sardinia Region and the Ministry of Education, University and Research, is designed for radio astronomy and is managed by the INAF.

The SDSA has now become officially operational in the context of the NASA’s Deep Space Network, but will also provide communication and navigation services for the European interplanetary probes, in connection with the ESA’s ESTRACK network. The antenna, which was born thanks to agreements between the ASI and the INAF and a specific ASI-NASA agreement, which ensure it is used in multiple interplanetary missions in cooperation with the Jet Propulsion Laboratory – (JPL), will allow scientists to pick up the extremely weak signals emitted by the satellites and interplanetary probes in the deep space.

Its debut was connected with the final stage of the Cassini mission in the Saturn system, where the SDSA followed the last days of the long journey of the probe, before diving into the planet’s atmosphere, last September 15th.

The agreements between the ASI and the INAF include exclusive activities by the Agency in the field of scientific and technological research, with infrastructures, equipment and communication and tracking operations related to the deep space and common interest activities which involve industries such as Radio Science, the monitoring of Space Debris and Space Weather. An increased capability for the SDSA, which will be further enhanced at later stages to give a full Deep Space Ground Capability to the country and will lead Italy to be increasingly involved in the current and future interplanetary missions.

The next steps of the SDSA development programme include the enhancement of the instruments and workforce, which will allow, by 2020, a full operational capability by the SDSA to provide complete services such as an International Deep Space station.  Furthermore, the Ka-band reception capability and, following an appropriate design stage, the transmission in the X and Ka-bands (the latter is specifically designed for radio science) will be added to the current X-band reception capability.

The first ASI’s external research unit, located by the INAF Observatory in Cagliari, is already carrying out data analysis, experimentation and research activities thanks to the SDSA, which involve broad scientific and technological space contexts and are related to the different types of interplanetary missions. The SDSA unit also carries out joint research activities with the INAF, within contexts of common interest. An agreement between the ASI and the NASA, signed in 2018 – which supersedes the agreement signed in March 2017 – lays down the further activities planned to develop the capability of the SDSA and its support activities to the NASA missions, including the acquisition of the tracking and telemetry data of the interplanetary probes, as well as the system validation and mission operations. Furthermore, an agreement was signed between the ASI and the University of Cagliari to carry out research and development activities in several fields of space scientific research.
The entry into service of the Sardinia Deep Space Antenna is the first step of a long and ambitious path, which aims at reaching the full reception and transmission capability in order to contribute to the management of the several missions to Mars which will be launched starting in 2020.

The Minister: this is how we build the European strategic autonomy END_OF_DOCUMENT_TOKEN_TO_BE_REPLACED

The Italian Space Agency and the company Argotec have released the first pictures taken by LICIACube, the only satellite involved in the NASA’s planetary defense mission, DART END_OF_DOCUMENT_TOKEN_TO_BE_REPLACED

Focus on the next Italian edition END_OF_DOCUMENT_TOKEN_TO_BE_REPLACED