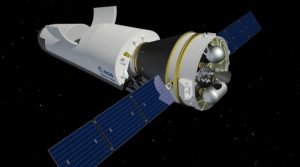 The Space Rider is a project of automated space vehicle, which can be reused for unmanned re-entry and is currently being studied by the ESA and mainly funded by Italy.

The Space Rider is a project of automated and reusable space vehicle for unmanned re-entry, which is currently being studied by the ESA and is mainly funded by Italy.

This mini-shuttle picks up the baton from IXV, an experimental space shuttle developed in Italy and tested in 2015, and should debut in 2021.

Strongly wanted by the Italian Space Agency, Space Rider is the result of an agreement between the ESA and Thales Alenia Space, together with the European Launch Vehicle consortium setup by Avio and the ASI. CIRA will play an important role in this system, up to the development and increase of telecommunication satellite applications.

Space Rider will be launched from the European spaceport of French Guyana, aboard the ESA VEGA vector, in its new C version. It could remain up to two months in space, testing new in-flight technologies and carrying out several microgravity experiments, whose results will be analyzed during the re-entry on Earth.

The space shuttle, which is capable of carrying out a controlled atmospheric re-entry from the low terrestrial orbit, will be made available to commercial and institutional customers and will have an 800-kg payload.

The Minister: this is how we build the European strategic autonomy END_OF_DOCUMENT_TOKEN_TO_BE_REPLACED

A new picture by the ASI hyperspectral satellite END_OF_DOCUMENT_TOKEN_TO_BE_REPLACED

A leading role for our country, with the Italian space sector guided by the Italian Space Agency END_OF_DOCUMENT_TOKEN_TO_BE_REPLACED