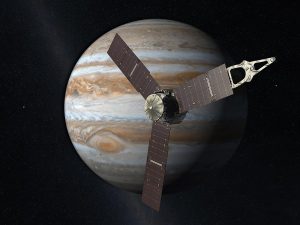 Subject line: origin and evolution of the Giant Planets.

Responsibility of the Mission: NASA

JUNO, selected in 2005, is the second mission of the NASA New Frontiers programme and is aimed at observing Jupiter. The launch took place on August 5th, 2011 from Cape Canaveral and the space probe arrived in the Jupiter orbit on July 4th, 2016. After the cruising stage, which included a fly-by around Earth performed on October 9th, 2013, Juno entered a polar orbit around Jupiter whose pericentre is equal to 1.06 Jupiter radii, optimized according to the scientific requirements and chosen also to minimize the exposition of the instruments to radiations. Juno will orbit around Jupiter for a year, for a total of 33 orbits.

The Juno mission aims at analysing the characteristics of Jupiter as a representative of the Giant Planets. In fact, Jupiter can provide us with the necessary knowledge to understand the origin of the Solar System and the planetary systems we are discovering around other stars.

Juno’s scientific goals mainly consist in understanding the origin and evolution of the planet Jupiter (there are currently three different theories on its formation), determining the internal structure of the planet and assessing whether it has a solid nucleus, exploring the polar magnetosphere and researching the origin of the magnetic field, measuring the abundance of water, characterising the winds in the low atmosphere and the relative abundance of oxygen and nitrogen and the variations due to atmospheric phenomena. Furthermore, another objective of the mission is observing Jupiter’s aurora borealis, already observed on Earth, and understanding its mechanism with the purpose of studying the magnetic field of the planet and its interaction with the atmosphere. With its spinning configuration, Juno will perform a complete map of Jupiter’s gravitational and magnetic fields and a study on the composition of the atmosphere. To reach such goals, a special focus was placed on defining the orbit, which will be polar and will undergo a precession motion to obtain a better coverage of the planet.

The Italian participation in the mission is based on the now established experience in the field of spectrometers, optical cameras and radio science. In particular, Italy provided two instruments: the JIRAM infrared imaging spectrometer (Jovian InfraRed Auroral Mapper, PI Alberto Adriani from the INAF-IAPS, manufactured by Leonardo-Finmeccanica’s Avionics Division) and the KaT radio science instrument (Ka-Band Translator, PI Luciano Iess from the Sapienza University of Rome, manufactured by Thales Alenia Space-I), representing the Ka-band portion of the gravity experiment. Both instruments take advantage of important synergies with the similar instruments under development for the BepiColombo mission, optimizing costs and increasing both the scientific and technological role of Italy.

The Minister: this is how we build the European strategic autonomy END_OF_DOCUMENT_TOKEN_TO_BE_REPLACED

A new picture by the ASI hyperspectral satellite END_OF_DOCUMENT_TOKEN_TO_BE_REPLACED

A leading role for our country, with the Italian space sector guided by the Italian Space Agency END_OF_DOCUMENT_TOKEN_TO_BE_REPLACED