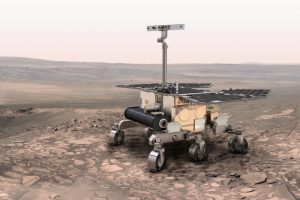 Italy, through the ASI, is the main contributor to the double EXOMARS mission, with a 40% of the total investment.

The mission is divided in two stages. During the first mission, launched on March 14th, 2016, the (TGO) probe reached the orbit of Mars after seven months of journey to start a long stage of investigations on the presence of methane and other natural gases in the atmosphere, but also to detect traces of the presence of active life. This stage also involved landing on the Red Planet – in the point named Meridiani Planum - a descent module (EDM), named Schiaparelli in honor of the Italian astronomer Giovanni V. Schiaparelli, the first person to draw an accurate map of the planet. In fact, the EDM separated from the probe on October 16th, 2016 and performed nominally all the predicted operations, up to the last stage of the descent – On October 19th – when, due to an anomaly in one of the control systems, the module crashed on Mars.

The second part of the mission involves landing on the Red Planet an innovative rover capable of moving and, in particular, penetrating the surface to analyse it. On October 21st, 2015, the ESA announced the choice of the first candidate site for the 2020 landing, selected due to its special characteristics within a shortlist of four candidates: Oxia Planum.

ExoMars was designed and manufactured with the main goal of acquiring and showing the autonomous European ability to perform a controlled landing on Mars’s surface, operating on the planet’s surface by moving around with an equipped rover and, furthermore, accessing to the subsoil to extract samples for in-situ analysis. Specifically, the mission is aimed at detecting the traces of past and present life on Mars and the geochemical characterization of the planet, in order to improve the knowledge of the Martian environment and its geophysical aspects and allow to identify the possible risks of future human missions.

The TGO on-board camera, named CaSSIS (Colour and Stereo Scientific Imaging System), is designed and manufactured at the University of Berna with the contribution of the INAF – Astronomical Observatory of Padua and the Italian Space Agency. CaSSIS provides high-resolution, colour stereo pairs of accurately selected regions. Furthermore, it supports the other instruments aboard the TGO in its search for gases that can be important from a biological point of view, such as methane gas.

DREAMS (Dust Characterization, Risk Assessment and Environment Analyser on the Martian Surface), aboard the Schiaparelli probe, is a detector suite which measures weather parameters (pressure, temperature, humidity, speed and direction of wind, solar radiation) and the atmospheric electrical field in proximity to Mars’ surface. It is the result of the cooperation between the ASI, the INAF – Astronomical Observatory of Naples and the CISAS of Padua.

AMELIA (Atmospheric Mars Entry and Landing Investigation and Analysis) is a modelling of the Martian atmosphere, which uses the data collected by the detectors during the descent of the Schiaparelli lander on the Martian surface. In cooperation with the CISAS of Padua.

MA_MISS (Mars Multispectral Imager for Subsurface Studies) is a spectrometer which analyses the geological and biological evolution of the Martian subsoil. It is inserted within the Drill and will allow to analyse the structure of the internal surface of the drilling performed by the Drill. In cooperation with the INAF-IAPS.

NOMAD (an acronym for Nadir and Occultation for Mars Discovery) is a set of high-resolution spectrometers, capable of analysing in detail the gases in the atmosphere of Mars. It will also be able to detect the compounds in the atmosphere, even in very low concentrations.

The ESA assigned to the Italian industry, and in particular to Thales Alenia Space Italia (Thales 67%, Finmeccanica 33%), the main leadership of both missions, as well the overall system responsibility for all elements. Furthermore, Thales Alenia Space Italia is also in direct charge of developing the mother probe (Orbiter), as well as the Schiaparelli lander and the project of the rover that will carry out the geological and biochemical analyses of Mars during the mission 2018. Finmeccanica’s Avionics and Aerospace Systems Division, instead, provides photovoltaic systems, power units and attitude sensors; furthermore it contributes, for the 2016 mission, to the manufacturing of the CASSiS instrument, which analyses the Martian atmosphere and manufactures, for the 2018 mission, to the special two-meter drill that will drill the surface of the Red Planet and extract samples to search for traces of past or present life. Also the development of the mission control centre, and the infrastructure providing the necessary communication to operate the rover control centre, are made in Italy and were manufactured by Telespazio (Finmeccanica 67%, Thales 33%).

ALTEC, a joint stock company fully owned by the ASI and Thales Alenia Space Italia, also has an important role in the mission. The control centre will be based at ALTEC premises, in Turin.

The Minister: this is how we build the European strategic autonomy END_OF_DOCUMENT_TOKEN_TO_BE_REPLACED

A new picture by the ASI hyperspectral satellite END_OF_DOCUMENT_TOKEN_TO_BE_REPLACED

A leading role for our country, with the Italian space sector guided by the Italian Space Agency END_OF_DOCUMENT_TOKEN_TO_BE_REPLACED