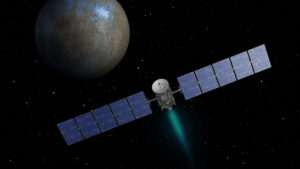 The Dawn mission was selected by the NASA on December 21st, 2001, in the framework of the Discovery Programme.

After the launch on September 27th, 2007, the probe performed a gravity assist manoeuvre with Mars in February 2009, then headed towards Vesta and reached it in August 2011.

Following the insertion manoeuvre in its orbit, the probe studied Vesta until the month of September 2012, then headed towards Ceres and reached it in Mars 2015.

Dawn was the only space vehicle to orbit around two different celestial bodies in the deep space: the asteroid Vesta and the dwarf planet Ceres. Their study provided several indications on the formation of the Solar System. During its long journey to approach the two objectives, Dawn also performed a flyby of Mars.

The main scientific goals of the mission are gathering information on the conditions in force during the initial stages of the evolution of the Solar System, i.e. on the first millions of years in its evolution, and on the process in play on the newly-formed bodies; characterising the “bricks” from which the terrestrial planets formed, increasing our knowledge of this process of formation.

Ceres is very primitive and preserves traces of water, unlike other minor planets; furthermore it has a tenuous, but permanent, atmosphere. Unlike Ceres, Vesta is evolved and dry and is the only asteroid showing noticeable signs of a complex thermal evolution, similar to the terrestrial planets.

To reach its scientific goals, Dawn characterises asteroids in terms of their shape and some physical properties (size, shape, mass, period and rotation axis), by assessing their morphological characteristics (local structures, crater distribution, the presence or not of regolith) in order to determine the geological and mineralogical nature of the surface. To this aim, Dawn is equipped with 3 instruments capable of observing electromagnetic emissions on a broad spectrum: from gamma-ray emissions to visible region and thermal infrared. Furthermore, radio waves are used to perform gravitational measurements by using the onboard communication systems.

The Italian participation in the mission consists in providing an imaging spectrometer operating in the visible region and in the near infrared with a high spatial and spectral resolution, to carry out the hyperspectral mapping of asteroids: the VIR-MS “Visible-IR Mapping Spectrometer”, derived from the VIRTIS instrument aboard the Rosetta mission, was built by the Selex Es in Florence. Furthermore, Italy will provide the manpower to the Dawn Project Team at the JPL/UCLA for in-flight operations.

On Friday 15 July, the first detailed study on this "New Year's Burst" was published in the Astrophysical Journal, using data acquired by the AGILE satellite END_OF_DOCUMENT_TOKEN_TO_BE_REPLACED