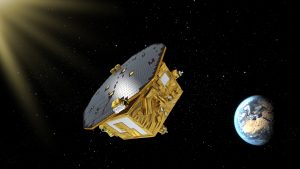 The LISA Pathfinder space mission is the technological forerunner of the gravitational waves space observatory planned by the ESA as the third large-scale mission of its Cosmic Vision scientific programme. It aims at verifying the possibility to place test masses in free-fall in the interplanetary space, with the unprecedented precision that is required for the gravitational observatory.

This result is obtained through a set of innovative technologies including, among others, inertial detectors, a laser metrology system and a satellite inertial control system through a micro-propulsion system. Such tecnologies are at the core of the more advanced design of the space observatory, known as LISA (Laser Interferometer Space Antenna) and whose most recent evolution is known as eLISA.

The launch of LISA Pathfinder was carried out by the Vega vector, at its sixth launch from the European spaceport of Kourou, French Guyana, on December 3rd 2015 at 5.04 AM, Italian time.

LISA-PF aims at testing the concept itself of detection of gravitational waves from space, showing that it’s possible to control and measure with very high accuracy the motion of two masses in free-fall conditions.

Among the key components of the mission are the inertial detectors produced in Italy by the General Company for Space (CGS spa), funded by the Italian Space Agency and designed by scientists from the University of Trento, supported by the National Institute for Nuclear Physics. The University of Trento had a key role in developing the detectors, in the framework of the Experimental Gravitation Group of the Department of Physics, coordinated by the same professor Stefano Vitale.

The LISA-PF mission falls within the framework of the ESA Scientific Programme, to which Italy contributes about 13%.

On Friday 15 July, the first detailed study on this "New Year's Burst" was published in the Astrophysical Journal, using data acquired by the AGILE satellite END_OF_DOCUMENT_TOKEN_TO_BE_REPLACED