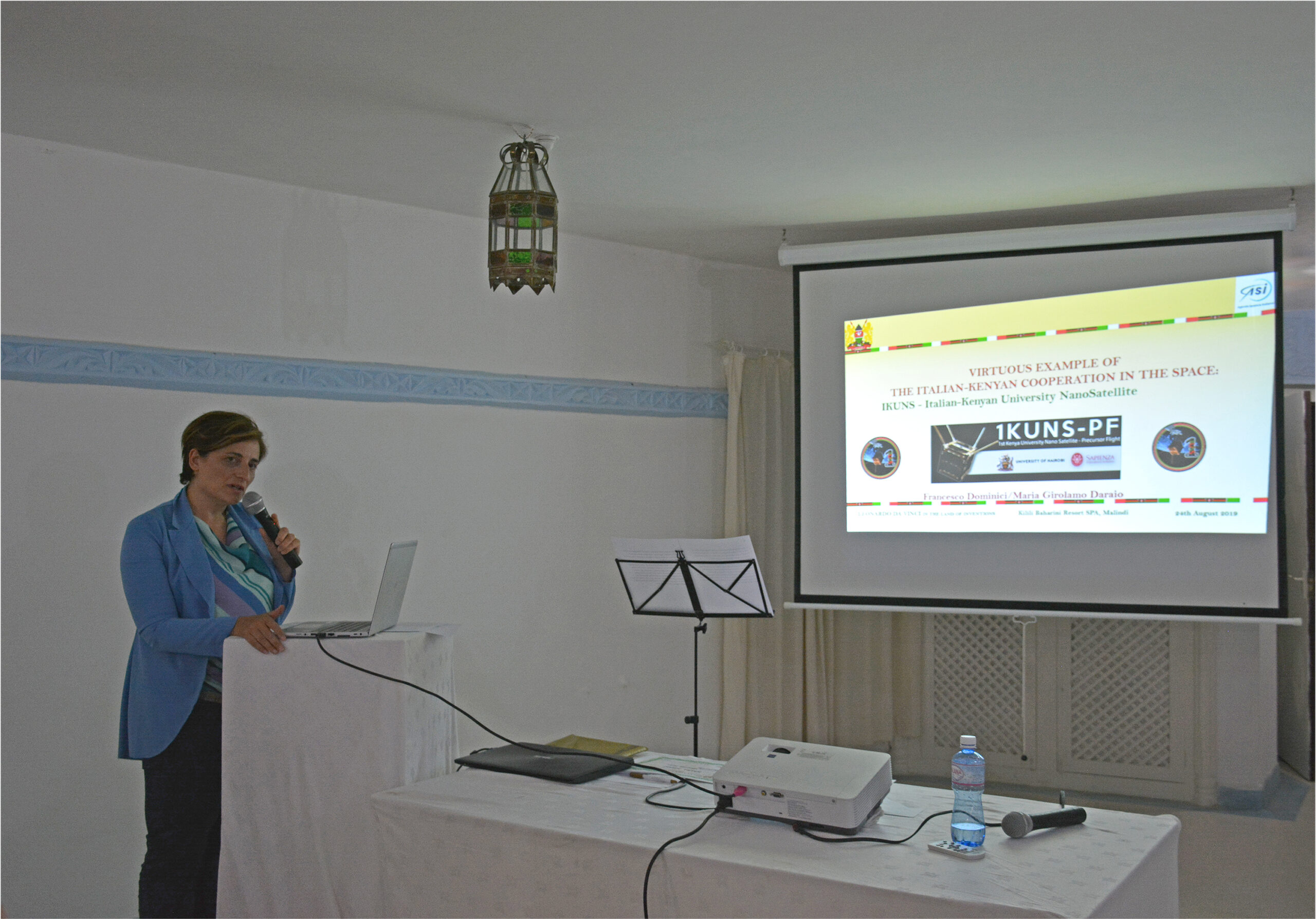 The project was presented on August 24th 2019, during an event dedicated to Leonardo da Vinci

The Ambassador of Italy in Kenya, Alberto Pieri, hosted the event "Leonardo da Vinci in the land of inventions" on Saturday 24th August, 2019 in Malindi at the Kilili Baharini Resort & Spa. Leonardo was remembered, among other things, as the father of technology, dream of flight and astrophysics. The event was attended by the Ministers of Culture and Health of the County of Kilifi, Maureen Mwangovyae, Anisa Omar, and the Office Manager Broglio Space Center Malindi, Francesco Dominici. The ASI Manager on duty at the Broglio Space Center in Malindi, Maria Girolamo Daraio, illustrated the IKUNS (Kenyan Italian Nanosatellite University) project as a virtuous example of Italo-Kenyan cooperation in the space sector.

IKUNS project was coordinated by ASI with the support of the Kenya Space Agency and it was jointly developed by University of Nairobi and “La Sapienza" University of Rome, with the aim to develop a CubeSat for Earth Observation and to pursue training and educational goals. It is part of the projects that ASI and "La Sapienza" started in 2015 in the framework of the agreement for the management and activities development  at the Broglio Space Center of Malindi.

1KUNS-PF (1st Kenya University Nano-Satellite – Precursor Flight) was the first CubeSat developed by the University of Nairobi with the technical support of "La Sapienza" University of Rome. It has been proposed by Nairobi University and selected by the Japanese Space Agency (JAXA) and the United Nations Office for Outer Space Affairs (UNOOSA) to be launched by the Japanese “Kibo” module of the International Space Station (ISS), in the framework of the “KiboCube” program, devoted to emerging countries. The CubeSat has been deployed from the ISS on 11th May 2018 and it is operational capturing interesting pictures of the Earth surface. The CubeSat hosts two commercial low-cost cameras taking low-resolution image of the Earth; it is also aimed at testing commercial technology in space.

The Minister: this is how we build the European strategic autonomy END_OF_DOCUMENT_TOKEN_TO_BE_REPLACED

The Italian Space Agency and the company Argotec have released the first pictures taken by LICIACube, the only satellite involved in the NASA’s planetary defense mission, DART END_OF_DOCUMENT_TOKEN_TO_BE_REPLACED

Focus on the next Italian edition END_OF_DOCUMENT_TOKEN_TO_BE_REPLACED