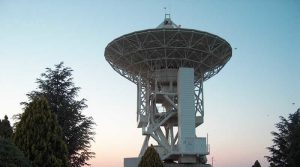 The Center for Space Geodesy (CGS) of the Italian Space Agency (ASI), named after the great scientist from Padua Giuseppe “Bepi” Colombo, was built in 1983 on the Murgia Terlecchia in Matera, thanks to the joint effort by the National Space Plan of the National Research Council (which was replaced by the ASI in 1998) and the Basilicata Region. The Center for Space Geodesy is the main ASI’s operation center.

Space Geodesy is the historical line around which the Center was built, followed shortly afterwards by remote sensing, to which were added, in order, the “free space” quantum communications, the monitoring of “space junk” and the metrology of time and frequencies.

Space Geodesy is the historical line around which the Centre was built, followed shortly afterwards by remote sensing. It is based on the continuous monitoring of the position of fiducial stations through multi-technical detection (laser telemetry of geodetic satellites or satellite laser ranging (SLR), very-long-baseline radio interferometry or VLBI, GNSS positioning, absolute gravimetry), with sophisticated and advanced tools which make it one of the essential cornerstones of the global geodetic network.

The activities of the CGS are of critical importance to understand the tectonics of the Mediterranean basin and several geophysical and geodynamic parameters, as well as the materialization of the international Terrestrial Reference Frame. Furthermore, the same instruments are used for other type of activities, such as space navigation, astrometry, radio astronomy, telecommunications and fundamental physics.

In the context of the International Association of Geodesy, the ASI/CGS is a member of the International Laser Ranging Service (ILRS), the International VLBI Service (IVS), the International GNSS Service (IGS) and the International Gravity Field Service (IGFS), both as an observation station and as a data analysis center. Since 2004, the CGS has been the Primary Official Combination Center of the ILRS, with the task to produce, on a weekly and daily basis, a set of global geodetic parameters which are determined through a rigorous combination of several independent solutions, coming from laboratories throughout the world. The CGS’ satellite and lunar laser telemetry system, known as MLRO (Matera Laser Ranging Observatory), was named after Rocco Petrone and “his extraordinary adventure from Basilicata to the Moon” on January 31st, 2004. Petrone, the son of Lucanian migrants to the USA, was the director of the Apollo missions which brought man to the Moon.

At the beginning of the 90’s, the ASI signed an agreement with the ESA to develop the Italian Processing and Archiving Facility (I-PAF) and, subsequently, the Italian Processing and Archiving Centre (I-PAC) for the monitoring of the data acquired with the ESA ERS-1/2 and ENVISAT satellite missions. The CGS had an essential role also in the Italian-German-American SIR-C/X-SAR and SRTM missions, with the acquisition of the first X-band radar satellites.

The evolution of the I-PAF/PAC is the Multimission National Centre (CNM), whose purpose is to acquire, process and store the remote-sensing data and, in particular, the data from satellites and instruments developed by the ASI, such as ROSA (Radio Occultation for Sounding the Atmosphere), for the study of climate change through the Radio Occultation technique and, soon, PRISMA (Hyperspectral Precursor and Application Mission).

One of the ASI’s flagships is the COSMO-SkyMed project, a constellation of four Earth observation satellites with X-band radar, manufactured by the Italian Space Agency and the Ministry of Defense. The Matera CGS manages the ground segment of the civil part of this dual system.

COSMO-SkyMed (Constellation of Small Satellites for Mediterranean basin Observation) is one of the most innovative programmes in the field of Earth observation and is the first space programme designed for dual applications, both civil (institutional and commercial) and military. The system, conceived by the Italian Space Agency and the Ministry of Defense, is the largest Italian investment in the sector of Earth observation and was entirely manufactured by national companies. COSMO-SkyMed is made up of a constellation of 4 satellites, equipped with high-resolution SAR (synthetic aperture radar) sensors, operating in the X-band and equipped with a flexible and innovative data transmission and acquisition system.

Conceived as a multi-mission system which is capable of integrating with other space systems to meet the requirements of a wide community of users, COSMO-SkyMed allows a global coverage of the planet by operating under any weather and lighting conditions, with a maximum of 12 hours-revisitation times on the same geographic area and fast response times (from the user request to the delivery of the product).

The constellation control centre is located by the Telespazio Fucino Space Center (L’Aquila), while the e-Geos (a subsidiary company of the ASI/Telespazio) Space Center in Matera is in charge of the acquisition, storage, processing and distribution of the data detected by the satellites, for civil applications.

Since 2003, the CGS has been cooperating intensively with the Department of Engineering of Information of the University of Padua, in the field of “free-space” quantum telecommunications, and established several records which were published in international journals. The MLRO system, equipped with a 1.5 meter-diameter telescope, is used for these activities: thanks to its versatility, it was possible to adapt it quite easily so that it can be used for these new applications.

The monitoring of space debris

On behalf of the ASI, the CGS is in charge of the space debris monitoring activities. Space debris is a concrete danger for the artificial satellites (first of all the ISS, International Space Station) which are still active. An astrographic automated passive system is used for these activities, and it will soon be supported by a MLRO system for active monitoring (laser).

The metrology of time and frequencies

The CGS hosts one of the nodes of the INRIM (National Institute of Metrological Research), targeted at the optical fiber synchronization of atomic frequency standards for experiments related to the metrology of time and frequency with applications to quantum telecommunications and space geodesy.

‣ No elements for this section

The Minister: this is how we build the European strategic autonomy END_OF_DOCUMENT_TOKEN_TO_BE_REPLACED

The Italian Space Agency and the company Argotec have released the first pictures taken by LICIACube, the only satellite involved in the NASA’s planetary defense mission, DART END_OF_DOCUMENT_TOKEN_TO_BE_REPLACED

Focus on the next Italian edition END_OF_DOCUMENT_TOKEN_TO_BE_REPLACED