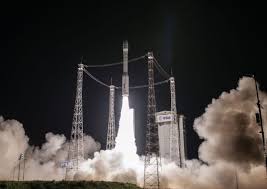 The project of the Vega launcher was born in Italy and was subsequently adopted by the European Space Agency. Italy supported the development programme with 65% of fundings, followed by France with about 12.5%. Spain, Sweden, Switzerland and the Netherlands also contributed to the development of Vega, with lower shares. Vega is a launcher capable of carrying a mass payload, that is a satellite, between 300 and 1500 kg, designed for a low polar orbit, which is an orbit inclined 90° to the equator, at an altitude of 700 km. Vega is about 30 meter high (while Ariane 5 is over 50 meter high) and has a mass at launch of 128 tons (vs. 710 tons for Ariane 5). By reducing the inclination of the required orbit and maintaining the same altitude, Vega is capable of launching a heavier payload.

Vega is made up of three solid propulsion stages, which have the task of overcoming gravity, and an additional liquid propulsion stage, between the third stage and the satellite to be launched, which monitors the structure of the launcher, its trajectory, the release of the satellite and the re-entry of the last stage into the atmosphere. The first three stages are known as P80, Zefiro 23 and Zefiro 9, respectively, and allow the launcher to reach the desired altitude; the forth stage, known as Avum, has the task of releasing the load.

From an industry point of view, Italian companies play a key role: Elv is a joint venture between the AVIO group (70%) and the Italian Space Agency (30%) and is in charge of the overall development of the launcher, whereas Avio is in charge of the development and manufacturing of the four stages, three of them with a solid propellant and the Avum with a liquid propellant. The first stage, P80, is the biggest monolithic motor ever produced with the Filament Winding technology. Finally, Vitrociset is in charge of manufacturing the ground-based segment, from the launch tower to the integration and test desk.

Today, orbiting satellites in the range of 1500 kg (as are those for astronomy and observation of Earth) with a launcher such as Ariane 5 is so expensive that it precludes the launch to small-medium enterprises or Universities and research institutes. Vega tries to fill this gap by guaranteeing to Europe, that is to enterprises and European institutions, an independent and low-cost access to space, with savings of about 15-20% vs. a launch carried out with an American vector.

Vega was launched for the first time from the launch platform in Kourou, French Guyana, on February 13th 2012, at 7 am (11 am in Italy), by orbiting Lares – the main payload –, the Almasat-1 missions and the seven CubeSats. It started its “commercial life” in 2013.

On Friday 15 July, the first detailed study on this "New Year's Burst" was published in the Astrophysical Journal, using data acquired by the AGILE satellite END_OF_DOCUMENT_TOKEN_TO_BE_REPLACED