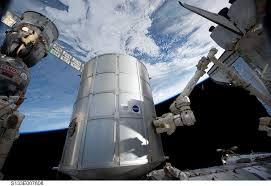 Launched aboard the STS-133 Space Shuttle on February 24th, 2011, it docked with the ISS on March 1st, 2011 through the Node-1. The PMM module is the amended version of the Multi-Purpose Logistic Module (MPLM) Leonardo, reconfigured to remain in space on a permanent basis.

Leonardo was mainly used to store the ISS’s replacement parts, supplies and waste material. In 2015, the module was relocated and docked with the anterior door of the Node-3, Tranquility. The PMM’s “relocation” was one of the reconfiguration operations for the International Station’s docking points, carried out to arrange the orbiting base in view of the docking of the Dragon and Cygnus commercial crew shuttles.

The relocation of the module allowed to “free-up” the door of the Unity node facing Earth, which was subsequently used as a docking point for commercial cargo vehicles, along with the Node-2, Harmony.

On Friday 15 July, the first detailed study on this "New Year's Burst" was published in the Astrophysical Journal, using data acquired by the AGILE satellite END_OF_DOCUMENT_TOKEN_TO_BE_REPLACED

The Italian experiments of the Minerva mission were presented END_OF_DOCUMENT_TOKEN_TO_BE_REPLACED