He spent 27 days, 15 hours and 10 minutes in space, during two missions 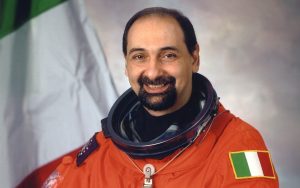 He was born on August 18th, 1954, has a degree in Astrophysics and in 1990 was selected by the Italian Space Agency as Payload Specialist. On the occasion of the first mission of the Tethered Satellite (STS-46/TSS-1), he was a backup for Malerba. His debut in space was in February 1996, with the Columbia shuttle for the STS-75 mission, which orbited the TSS-1R experiment. In 2001, he was the first European astronaut to enter the International Space Station, which was still under development. This was an acknowledgment to Italy for its role in the manufacturing of the ISS and brought six flights for the ISS and, later on, 1 every 5 years of operation for the modules manufactured in Italy by the ASI.

A leading role for our country, with the Italian space sector guided by the Italian Space Agency END_OF_DOCUMENT_TOKEN_TO_BE_REPLACED

The astronaut concludes the Minerva mission after almost six months aboard the space outpost. Watch the video on ASITV END_OF_DOCUMENT_TOKEN_TO_BE_REPLACED

Samantha has become the first European woman to take the lead of the space outpost. The video is available on ASITV END_OF_DOCUMENT_TOKEN_TO_BE_REPLACED