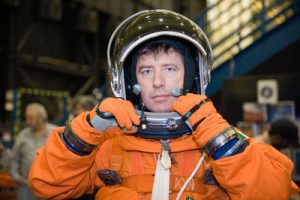 He was born in Viterbo on October 15th, 1964, he’s an Air Force pilot and was selected by the Italian Space Agency in 1998. In 2002, he took place in the Italian Marco Polo mission aboard a Russian Soyuz TM-34 capsule, where he was the first European to be appointed as pilot. He took the same flight in 2005, aboard the Soyuz TMA-6 for another Italian mission, Eneide.  He came back to space for the third time in 2011 with the second-to-last mission of the STS-134 shuttle, on the Endeavour shuttle. The mission, known as DAMA, fell within the group of the Italian Space Agency missions for the ISS; such missions are the result of an agreement with the NASA for the supply of the logistic modules. The mission has the task of installing the AMS-02 dark matter and antimatter detector on the International Space Station.

The astronaut concludes the Minerva mission after almost six months aboard the space outpost. Watch the video on ASITV END_OF_DOCUMENT_TOKEN_TO_BE_REPLACED

Samantha has become the first European woman to take the lead of the space outpost. The video is available on ASITV END_OF_DOCUMENT_TOKEN_TO_BE_REPLACED

On Friday 15 July, the first detailed study on this "New Year's Burst" was published in the Astrophysical Journal, using data acquired by the AGILE satellite END_OF_DOCUMENT_TOKEN_TO_BE_REPLACED