Riyadh, Saudi Arabia, 7 October 2020 - The Saudi Space Commission (SSC) organized the first meeting of the Heads of Agency of the G20 countries, hosted by the Saudi Secretariat of the G20, entitled Space Economy Leader Meeting - 20.

The meeting focused on the importance of the space economy and its contribution to the global economy, and stability, to the promotion of cooperation, in particular, space collaboration for peaceful purposes.

In addition to the space agencies of the G20 countries, the United Nations Office for Outer Space Affairs (UNOOSA), the Organization for Economic Cooperation and Development (OECD) and the European Union (EU) took part in the event.

The President of the Italian Space Agency (ASI), Giorgio Saccoccia, in his statement recalled the importance of space economy as a driver of global economy and confirmed that ASI will continue the work carried out in last months to ensure that Space is included in the agenda of the G20 Heads of State and Government. ASI declared itself ready to host the second Space Economy Leader meeting in 2021 and, to this end, suggested the creation of a Working Group to prepare the new agenda that can become an Engagement Group, similarly to the other groups within the G20. 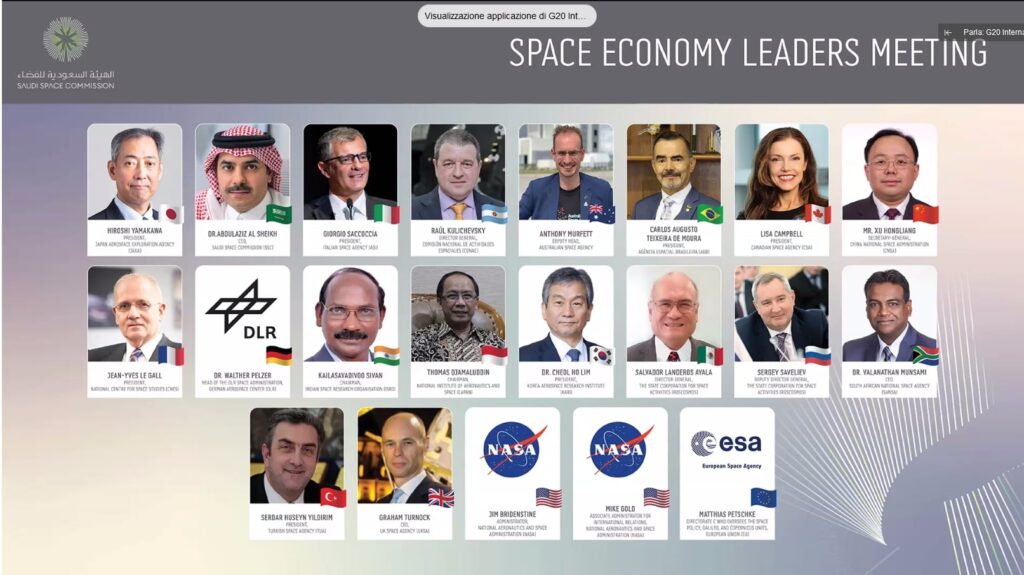 The Minister: this is how we build the European strategic autonomy END_OF_DOCUMENT_TOKEN_TO_BE_REPLACED

The Italian Space Agency and the company Argotec have released the first pictures taken by LICIACube, the only satellite involved in the NASA’s planetary defense mission, DART END_OF_DOCUMENT_TOKEN_TO_BE_REPLACED

Focus on the next Italian edition END_OF_DOCUMENT_TOKEN_TO_BE_REPLACED