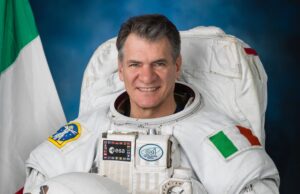 He was born in Milan on April 6th, 1957 and has a degree in Mechanical Engineering and Aeronautics Sciences. He was selected in 1998 by the Italian Space Agency. His first mission was the ASI STS-120, known as Esperia, which started in October 2007 and aimed at carrying and attaching the “Node-2” module, manufactured in Italy, to the International Space Station. Afterwards, he was the first Italian astronaut to take place in a long-term mission. Such European Space Agency mission is known as MAGISSTRA and started on December 20th, 2010, aboard the Soyuz TMA-20. He came back to space in 2017 for an ASI long-term mission, known as VITA, still aboard the Soyuz MS-09. He’s currently the man who spent most time in space at an European level, with his 313 days, 02 hours and 36 minutes in space.

On Friday 15 July, the first detailed study on this "New Year's Burst" was published in the Astrophysical Journal, using data acquired by the AGILE satellite END_OF_DOCUMENT_TOKEN_TO_BE_REPLACED

The Italian experiments of the Minerva mission were presented END_OF_DOCUMENT_TOKEN_TO_BE_REPLACED