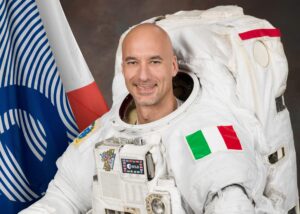 He was born in Paternò (CT) on September 27th, 1976. He’s a test pilot for the Air Force and has a degree in Political Sciences from the Accademia Aeronautica. He was selected by the European Space Agency in 2009 and, in 2012, he was assigned to the ASI Volare mission, which launched towards the International Space Station on May 2013, 28th. During his mission, he was the first Italian in history to carry out extra-vehicular activities. On July 20th, 2019, he started a new, long-term European Space Agency mission, Beyond, whose destination was again the ISS.

A leading role for our country, with the Italian space sector guided by the Italian Space Agency END_OF_DOCUMENT_TOKEN_TO_BE_REPLACED

The astronaut concludes the Minerva mission after almost six months aboard the space outpost. Watch the video on ASITV END_OF_DOCUMENT_TOKEN_TO_BE_REPLACED

Samantha has become the first European woman to take the lead of the space outpost. The video is available on ASITV END_OF_DOCUMENT_TOKEN_TO_BE_REPLACED