The first detection of the presence of liquid salty water at the base of the southern polar cap of Mars date back to research published in 2018 and 2021. Yesterday, September 28, the third study was published in Nature Communications by an Italian-US team.

Led by Roberto Orosei (INAF-IRA) and Elena Pettinelli (Roma Tre University) with the coordination of ASI, the Italian team of MARSIS, the Italian radar aboard ESA's Mars Express mission, has received further confirmations. 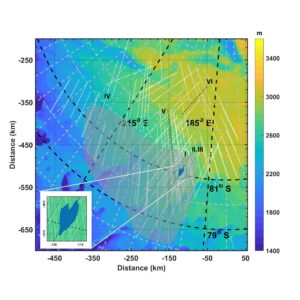 Thanks to a new collaboration between the Italian team, which led the initial discovery, and American colleagues, it has been possible to conduct new laboratory experiments and simulations that have conclusively demonstrated the incompatibility between Martian temperatures and MARSIS operating frequencies with the presence at the base of the ice of materials other than salty water.

This discovery has been the subject of alternative interpretations but the new publication in the journal Nature Communications by Lauro and colleagues reports novel results confirming the first studies.

The research concerns the physical properties of the southern Martian polar deposits (the so-called SPLD - South Polar Layered Deposits) which have been inferred from the estimation of the energy loss by the radar signal due to the propagation inside the ice.

The study demonstrates that the attenuation of the MARSIS signal depends on the frequency and is constant in the entire analyzed region, thus confirming the compositional homogeneity of the polar deposits at MARSIS scale and providing important information on the nature of the material at the base of the ice. According to the researchers' calculations, the dust content in the polar deposits is between 5 and 12% and the basal temperature cannot exceed the value of 230 K (-43 ° C). “This study shows that the temperature at the base of the SPLD computed thus far has been underestimated and can easily reach 200K (-73°C)”, comments Graziella Caprarelli, a planetary scientist from the University of Southern Queensland and co-author of the paper.

"The new results allowed us to recalculate the value of the dielectric permittivity in the entire analyzed region, providing a value of 40 in the highly reflective area; this value is compatible only with the presence of salty water "says Sebastian Lauro, first author of the article.

“The puzzling question regarding why SHARAD, the high frequency radar sounder onboard the US spacecraft MRO, does not see the basal reflector at Ultimi Scopuli is now resolved” says Elena Pettinelli, the corresponding author of the article “the attenuation at such frequency is too high to allow the signal to reach the base of the ice sheet”.

Roberto Orosei, the PI of MARSIS comments: “Our study also shows that the high reflected signals cannot be generated by constructive interferences, as suggested by a recent paper published on Nature Astronomy. In fact, the interference phenomena proposed should generate a specific signal frequency behavior only in the bright area, whereas our study clearly demonstrates that there is no difference in the signal frequency behavior between the highly reflective area and the surrounding regions”.

"The confirmation of the presence of liquid salty water under the southern polar cap of Mars is an important recognition of the scientific results achieved with the data collected by MARSIS, the radar developed by ASI, and accomplished with the terrific work done by the Italian scientific team. This result is of great importance not only for science, but also for the future of Mars exploration " concludes Barbara Negri, head of Human Flight and Scientific Experimentation for ASI.

The study has been the result of a joint effort among different institutions: Roma Tre University, the University of Southern Queensland, the Southwest Research Institute, the Planetary Science Institute, the Institute for Electromagnetic Sensing of Environment of CNR (IREA-CNR) and the IRA-INAF.

Watch the replay of the press conference on ASITV END_OF_DOCUMENT_TOKEN_TO_BE_REPLACED