Hon. Riccardo Fraccaro, Undersecretary of State at the Presidency of the Italian Council of Ministers and Nasa Administrator Jim Bridenstine signed a joint statement of intent for cooperation in the Artemis program

The United States and Italy have a long history of successful cooperation in science and exploration of outer space for peaceful uses. This history is a result of the strong relationship between the U.S. National Aeronautics and Space Administration (NASA) and the Italian Space Agency (ASI).

In this spirit of continued collaboration, the Signatories express their mutual desire to further develop cooperative lunar exploration activities, with a specific focus on returning humans to the surface of the Moon for peaceful purposes and for the benefit of all nations.

In this framework, Italy is considering with great interest the United States’ comprehensive Artemis Program which, building upon the legacy of the Apollo Program, will land the first women and the next men on the surface of the Moon while developing the technologies and experience necessary to mount a historic human mission to Mars. 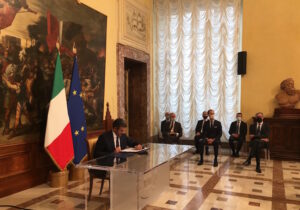 The United States welcomes Italy’s interest in the Artemis Program and contributing towards a sustainable human presence on the Moon. The vehicle for Italy to do so are the “Artemis Accords,” a set of principles to facilitate the creation of a safe, transparent, peaceful, and prosperous future in space for the United States, Italy, and all of humanity.

The common understanding of the Signatories is that by participating in the Artemis Program, Italy will be well positioned to take part in the exploration of the Moon and preparations for a future mission to Mars. In addition to direct cooperation between the governments, Italy and the United States could expect to benefit from commercial collaborations among their industries, in compliance with the two countries’ respective laws and regulations.

Italy and the United States are interested in exploring potential Italian contributions to the Artemis Program, including but not limited to: the provision of crew habitation capabilities on the surface of the Moon and associated technologies to enable short-duration stays for crews on the Moon; the conduction of lunar surface science experiments and investigations; and the provision of telecommunication services through surface assets and lunar orbital constellations.

"The declaration of intent is a recognition of our scientific and productive excellence - said Riccardo Fraccaro Undersecretary of State at the Presidency of the Italian Council of Ministers -  our goal is to create a driving force that will increase the competitiveness and growth of both countries. A civil, commercial exploration and at the same time aimed at ensuring sustainability and awareness of the space environment. The Artemis mission is the beginning of an exciting journey through the history of space".

“Today’s signing represents the latest chapter of successful cooperation between the U.S. and Italy in the area of space exploration - said Nasa Administrator Jim Bridenstine - With a long history of successful collaboration in human spaceflight, as well as in Earth and space science, the Italian government’s strong support for Artemis assures this partnership will extend to cooperation in the next phase of exploration on the lunar surface".

After committing to the principles of the “Artemis Accords,” bilateral implementing arrangements would be executed to support joint Artemis Program activities taking into account the Framework Agreement between the Government of the United States of America and the Government of the Italian Republic for Cooperation in the Exploration and Use of Outer Space for Peaceful Purposes, done at Washington, D.C., on March 19, 2013.

"Today's Declaration of Intent between the Goverments of Italy and the United States for cooperation on the Artemis Lunar exploration Program gives us great satisfaction and bears witness to the longstanding friendship between our countries and the well established tradition of bilateral cooperation between ASI and NASA. The Implementation Agreements between the two space agencies that will follow will define the Italian contribution to this Program. This will include habitat modules, scientific experiments and telecommunication services, so as to fulfill the dream of a sustainable human presence in orbit and on the lunar surface”, said the President of the Italian Space Agency (ASI), Giorgio Saccoccia.

Watch the replay of the press conference on ASITV END_OF_DOCUMENT_TOKEN_TO_BE_REPLACED